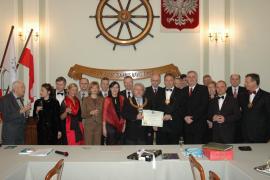 The idea to establish a new Rotary Club in Szczecin was born in April 2001, during the meeting of members of Rotary Club Szczecin: Jurgen Preiss, Ronald Stone, Tommy Hellstroem, Peter Swosdyk and Roman Gawrych. The English language was chosen as a official language for meetings to give the Polish and International membership a common language of understanding and functioning of the Club’s activities.

On 29th of May 2001 Ryszard Kaszuba Krzepicki – the Governor of District 2230 pointed Roman Gawrych as the special representative to build a new Rotary Club in Szczecin. The place of meetings was decided: Radisson SAS Hotel – Mondays 20.00 hrs.

The board of the club was elected:

On 22nd of November 2001 Rotary Club Szczecin Pomerania was registered in the Court (with great help from Beata Kmieciak).

On 19th of March 2002, RC Szczecin Pomerania with 24 members was admitted as a new member to Rotary International ID No 57690.

Charter Day took place on 20th of April 2002 at Radisson SAS Hotel in Szczecin with guests from over 26 Clubs from Poland and Europe. Governor Andrzej Ludek presented the Club the Certificate of Rotary International. The President’s Chain was given to us as a gift from Ystad RC, the Rotary Flag from Luebeck and Rotary Bell from RC Jersey Island.