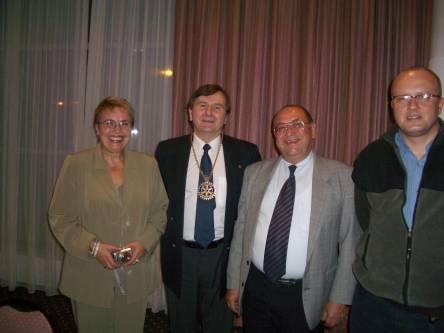 On Monday the 15th October we had the pleasure to welcome Professor dr. hab. inz. Igor Ariefiew, from the Academia Morska, Szczecin and his wife Elzbieta.
The Professor is a native of St Petersburg and shares his duties between St Petersburg where he is the Vice Chancellor and Szczecin. Professor Ariefiew outlined his University work in the Faculty of Transport Engineering. He is studying and promoting the use of Water-borne transport using Sea, Rivers and Canals as the lowest cost bulk transport, second only to pipe-lines in cost effectiveness. This is particularly useful when considering transport over the large distances from the Far East to Europe.
The Naval College at St Petersburg was set up 250 years ago by Czar Alexander the First and for the last 10 years the Professor has been sharing his duties between the two Universities. Mrs. Elzbieta Ariefiew also talked about her work in St Petersburg where she was able to set up a school for children of Polish extraction under the perestroika environment.
The Professor is a member of the Rotary Club of St Petersburg and we hope that there may be some opportunities for future co-operation and both are very welcome to attend any future meetings.Phil Brooks

Our guests Professor Ariefiew and wife Elzbieta, and Artur Bilski from MCNE 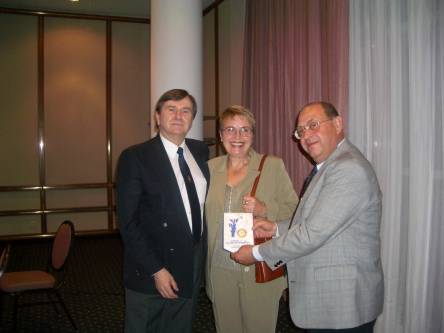 The Professor receives our Club Banner